Colmcille and the Battle of the Book: Technology, Law and Access to

St Colmcille is remembered, inter alia,  for his part in the ’ Battle of the Book’: Colmcille copied a book while a guest of St. Finian’s, the abbot of the monastery at Moville . When Finian found out about the Copy, He claimed the copy — as well as the book —

Colmcille refused and a dispute began.

“To every cow its calf; and to every book its copy.”

However, though Columcille was a member of the Ui Neill clan and kinsman to the high king, he identified with his mother’s family the clan o Donnell, according to Celtic custom.

The O’Donnell’s did not recognise the right of the upstart Ui Neills to hold the high kingship of Ireland, so Columcille felt justified in defying Diarmuit’s order– declaring “the wrong decision of the judge is a raven’s call to battle!”

In consequence to this ruling (or perhaps one reason of many), in 561 AD, the High King and Colmcille engaged in battle on the slopes of Benbulben. Aided by an angel, Colmcille won. Thousands of men were slain and the King forced to concede the copy of the Psalter to Colmcille. 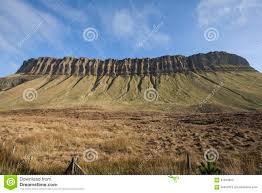 Benbulben today stands, much as it was then as a “tabletop” Mountain in Sligo. It is an Amazing site to see so go and visit Sligo if you would like to (but here is a pictures):

St. Colum Cille (521-597 AD) “Columba”   —   Colum Cille was given this name when he became a monk–the name meaning “Dove of the Church”.  He is sometimes he is referred to as Colmcille or Columba, which is the Latin for Dove. At this time,  “Brehon law” was used in Ireland. One of the main changes later was the ending of Brehon Law, and the implementation of “primogeniture” — that the British brought to Ireland. Today, most Western Societies use “primogeniture” which to this very day is where Children inherit from the Father or Mother (rather than the  “community” inherits when one dies — thus splitting the property/assets of a deceased member of the community, between other members of the community (not necessarily to the Wife, or Children, who although members of the community, do not benefit from the Relative’s wealth).

It is essentially the start of modern society and the passing of Wealth down to families.

It was the End, (or beginning of the end) of the “Sept system” that was used  in Ireland for Hundreds of Years — and it took Hundreds of years to eliminate it in Ireland.

Today, many people are not even aware of Brehon laws and what happened when a member of a community (or Sept) died– but if you search for it,  you will find it was used for many Centuries in different areas of the World like Ireland !

Wherever and whenever Columba could get access to Books (or other written materials) he would have a copy made to encourage his monks to copy, study and learn — and to disperse these copies of books to spread the teachings of the church.

Columba was one of the earliest in the tradition of Irish monks committed to such a philosophy, credited with saving the church’s literary treasures during Europe’s Dark Ages — when book burning was a common practice among religious zealots who might not like, or disagree with the Book’s information. This essentially kept people, and Communities (“Septs”) ignorant and did not let them learn of new things, or old things they had never been exposed to previously.

Around this time (mid-550s AD), Colmcille’s former teacher and fellow monk, Finnian, brought home a copy of the  Vulgate , after a visit to Rome. The Vulgate was the definitive Latin translation of the bible done by St. Jerome about 100 years earlier. This was the first copy of the book to reach Ireland and generated some considerable excitement throughout the land.

The Cathach of Columba now resides in the Royal Irish Academy in Dublin and is thought by some to be the copy of the Psalter Colmcille made of Finnian’s manuscript but tests have dated this script to the 7th century.”) Colmcille was of course very interested, so he visited “his old teacher … in order to see it. Finnian, delighted to see him, willingly showed him the book, though he was generally very protective of it. … Whatever the circumstances of Colmcille’s initial encounter with the book and any conditions Finnian might have placed on his handling of it, it’s fairly clear that Colmcille decided to make a copy surreptitiously by night.”

When Finnian discovered this, he was not happy and demanded “Colmcille ” give him the copy. The copy Colmcille  had made became a big dispute that, as noted, went to the highest levels of then Communities legal structure — essentially like today’s Supreme Court.  Colmcille was … “enraged that an old man should presume to act as such a reluctant gatekeeper to a book”, (and to attempt to stop the sharing of knowledge) ” which was crucially important to the future of the church in Ireland.”

So the two Monks decided to ask King Diarmid, then High King of Ireland, to settle the dispute.

Colmcille, in his defense, argued that he should be able to keep the copy of the book because it was important to spread this knowledge:

“My friend’s claim seeks to apply a worn out law to a new reality. Books are different to other chattels (possessions) and the law should recognise {sic} this. Learned men like us, who have received a new heritage of knowledge through books, have an obligation to spread that knowledge, by copying and distributing those books far and wide. I haven’t used up Finnian’s book by copying it. He still has the original and that original is none the worse for my having copied it. Nor has it decreased in value because I made a transcript of it. The knowledge in books should be available to anybody who wants to read them and has the skills or is worthy to do so; and it is wrong to hide such knowledge away or to attempt to extinguish the divine things that books contain. It is wrong to attempt to prevent me or anyone else from copying it or reading it or making multiple copies to disperse throughout the land. In conclusion I submit that it was permissible for me to copy the book because, although I benefited from the hard work involved in the transcription, I gained no worldly profit from the process, I acted for the good of society in general and neither Finnian nor his book were harmed.”

But the King ruled against him. :

I don’t know where you get your fancy new ideas about people’s property. Wise men have always described the copy of a book as a child-book. This implies that someone who owns the parent-book also owns the child-book. To every cow its calf, to every book its child-book. The child-book belongs to Finnian.

“The ruling led to the slaughter of the three thousand at Cooldrummon.” Said Corrigan. Finnian was not the author of the book Colmcille copied.

Colmcille and the Battle of the Book

Drumcliffe on the mainland near nowdays Sligo Town, was founded by St. Colmcille in 574 AD.

St. Molaise of Inishmurray was confessor to St. Colmcille and it was to him this holy man went in great remorse after the Battle of the Books at Cooldruman in north Sligo. The battle came about when Colmcille copied a book while a guest of St. Finian. requested that the copy be returned to him and Colmcille refused. When the problem was brought before the High King of Ireland his inspired decision of: ‘To every cow its calf and to every book its copy’, was rejected by Colmcille. In A.D. 561 the two men, mustering their armies, fought a pitched battle on the slopes of Benbulben mountain. Aided by an angel, Colmcille won the battle, thousands of men were slain, and the king had to award the copy of the psalter to Colmcille.

Stricken by remorse Colmcille went to Inishmurray to confess his sins to Molaise. As a result of this meeting Colmcille wento Iona off the coast of northwest Scotland, and Columcille and his monks established a monastery and scriptorium there at Iona, Scotland, in 563 A.D, which would become a Famous place as during the “dark ages” they copied or made many books, some which survive to this day.  His penance was to convert more people to Christ than had fallen in the Battle of Culdreimhne.  Leaving Ireland he was one of a wave of Irish missionaries that colonised a barbaric Europe, bringing learning, culture and religion with them. Scots, Picts, Irish, Britons and Anglo-Saxons poured into Iona to learn at Colmcille’s feet. Iona was the center of the dark ages light that Colmcille lit — if it were not for His works, much would have been lost.

Many of the works can be seen here: https://www.flickr.com/photos/[email protected]/

Inishmurray island still exists and One may still view Molaise’s monastic settlement. It has many curious artefacts many of which may well have their origins in pagan beliefs.

The most remarkable feature of Teac na Teine (House of the Fire) inside the main enclosure is the Leac na Teine or Stone of the Fire which is located in the centre of the floor. Tradition holds that if all the fires went out on the island a sod placed on Teac na Teine would ignite spontaneously. A visitor to the island, having heard of the magical properties of the stone, proceeded to urinate thereon so as to disprove the legend.

According to an account given to W.F. Wakeman, the 19 th century antiquarian, ‘a miracle was the immediate result. The fire which up to that fatal moment had been scarcely visible, at once flared up, and swiftly assumed the strength and appearance of a burning fiery furnace, its flames lapping and enveloping the wretched victim, so that he could neither struggle against them or fly, and stood melting, as it were, into nothingness, so that after a moment little remained but fragmentary bones, cracked and distorted’. Until recent times visitors to the island were shown fragments of fire-blackened human bones stored in a niche of the wall of Teach na Teine as proof that the incident actually happened.

The largest of the altars inside the compound is the Clocha Breacha commonly known as the Cursing or Speckled Stones. The power of the stones was said to have been invoked at the Clocha Breacha by theislanders in the early 1800’s against some men connected with the coast guard who had aroused the wrath of the Inishmurray people. The men in question ‘all perished at sea a short time after’. In more recent times it was used by a woman from the mainland who travelled to the island to invoke the dark powers against Hitler. Proof indeed of the efficacy of the stones!

The moss covered stones of Cashel keep their counsel now, but we know that long ago they resounded, not always to the caress of prayer and hymns of praise but, on occasion, to the screams of dying men martyred by marauding Danes:

‘Wasting fire and dying groan, And priests slain on the altar stone.’

Red marks on a flagstone near the doorway of Teach Molaise (Molaise’s House) are claimed to be the blood of the last reigning Abbot murdered there by the Norsemen in 807 A.D.!

Colmcille and the Battle of the Book:

Technology, Law and Access to Knowledge in 6th Century Ireland